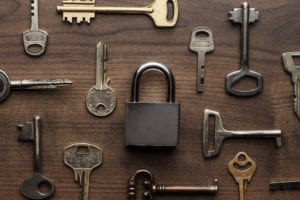 Beginning about four thousand years ago in Babylon and Ancient Egypt, locksmithing is not a new profession. Often hefty, the original locks were made of wood and were bulky—they did, however, work about the same as they do now. As the idea of utilizing locks to protect valuables spread, the use of this lucrative tool disseminated to areas such as Rome, Greece and China.

In Rome, the key would often be adorned by the owner, sometimes as jewelry; rings were a popular ornamental use. This allowed for the security of having the key on one’s self, as well as a means of exuding status. After all, only the richest had anything worth protecting.

Starting from the mid-14th century, suddenly locksmiths were considered artists, now having to design intricate pieces for high status members of society. They would include lots of symbols, and hold profound meanings. However, the locks were still not of upmost caliber. Design was revered in lieu of security. In the 18th century, however, higher security was finally a concern, and locks became more durable.

For the most part, however, locks have been quite unchanged in security throughout history. After the industrial revolution of the 18th century, however, suddenly locks were more intricate in their design, with a new lever tumbler lock. Essentially, the level had to be pushed up to the exact spot for the lock to be undone. This is a system we’re still using now.

Eventually a four lever system became a six lever system, with even more assurance of security; with an internalized disk, keys could pass through, but now the backbone of the levers would be hidden from those who could possibly pick the lock.

While at one point, the job of a locksmith was more artistic, it is now a highly mechanical vocation, in which the duties primarily include maintaining, repairing and selling locks. Most locksmiths are highly capable in working with metal, wood, electronics and mechanics.

When you have a trustworthy locksmith, they can truly be a jack of all trades. For great service, check out your local locksmith in Brooklyn, NY, M&D Lock and Keys. With 24 hour locksmith service in Brooklyn, what else could you need?

VISIT US ON SOCIAL MEDIA

We are a family owned and operated locksmith company serving Brooklyn, NY and the surrounding area! We have 20 years of extensive experience in auto locksmith services, commercial and residential locksmith service.